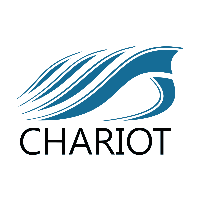 In conjunction with the Sparkplug specification, it is very useful to set up a working system that uses the MQTT Sparkplug specification in order to observe a simple but fully functional system.  This section of the tutorial will provide step by step instructions for installing and configuring Ignition Edge MQTT and an Ignition Gateway to show tags being published from Ignition Edge to the Ignition Gateway running MQTT Distributor and MQTT Engine.

Upon completion of this tutorial you will have all of the required components to configure, deploy, and observe the Sparkplug MQTT specification in action. 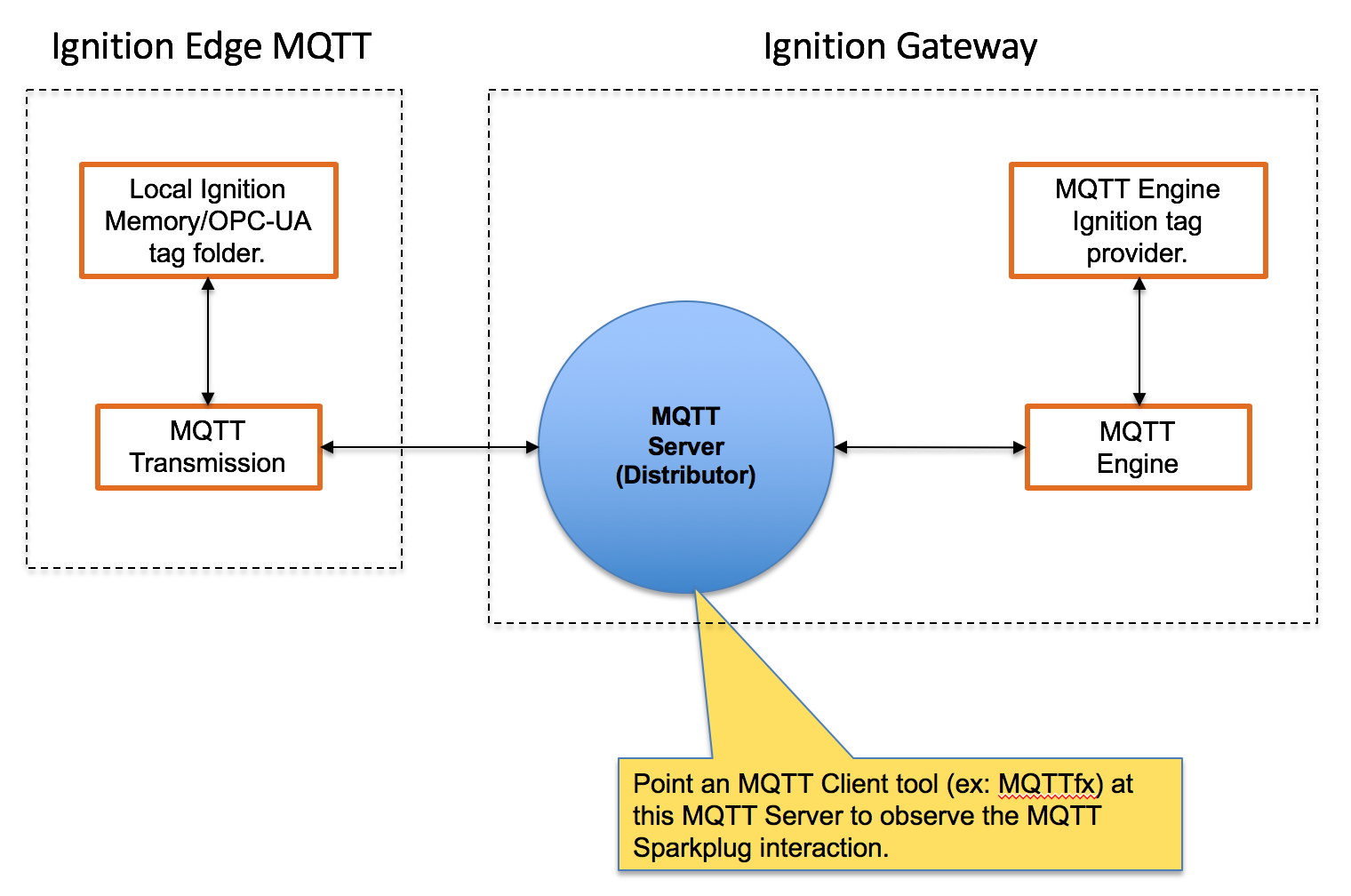 Ignition is an Industrial Application Platform that can be used to create SCADA and HMI solutions. A fully functional Ignition system can be downloaded and run in trial mode. Using Ignition as a tool in this way, we can install the Sparkplug MQTT Modules and observe everything working.

Go to the Inductive Automation download page and download the desired version of Ignition installer for Windows, Linux or MacOS;
https://inductiveautomation.com/downloads/archive.

Once the Ignition installer has been downloaded, follow the instructions provided by Inductive Automation to install and start Ignition.

Important Note: For this test infrastructure, MQTT Distributor will be installed as an Ignition module. Remember to either turn off firewalls or at a minimum allow inbound connections to TCP/IP port #1883 and port #8883, as remote MQTT Clients will need to be able to establish a TCP/IP socket connection to these ports.

Ignition Edge MQTT is a new stripped down version of Ignition that is specifically designed for use as an Edge of Network device.

See the Ignition Edge installation guide here.  Follow the sections for Ignition Edge MQTT and for your specific Operating System.  Make sure this is being installed on a different machine than was used to install Ignition in step 1.
https://docs.inductiveautomation.com/display/DOC79/Installing+Edge

Go to the Inductive Automation download page again and scroll down to the Third Party modules section. Find the Cirrus Link modules section and download the MQTT Distributor, MQTT Engine, MQTT Transmission modules.
https://inductiveautomation.com/downloads/archive.  The download links should look similar to what is shown below.

Once you have Ignition installed and running, and the MQTT Distributor, MQTT Engine and MQTT Transmission modules downloaded, browse to the Ignition Gateway console (e.g. http://localhost:8088).

Log in to the Ignition Gateway installed in step 1 using the default credentials of admin/password.  Click on Configuration tab and then click on the Modules tab on the left side of the page.  Scroll to the bottom of the Modules section and click on the Download/Upgrade modules button.  When prompted, select the MQTT Distributor module from the file browser and install it.  Do the same for the MQTT Engine module.  When complete, the Ignition Gateway Web UI module section should look similar to what is shown below.

Now log in to the Ignition Edge MQTT installed in step 2 using the default credentials of admin/password.  Click on Configuration tab and then click on the Modules tab on the left side of the page.  Scroll to the bottom of the Modules section and click on the Download/Upgrade modules button.  When prompted, select the MQTT Transmission module from the file browser and install it.  When complete, the Ignition Edge MQTT Web UI module section should look similar to what is shown below.

Step 4: Configure the MQTT Modules on the Central Ignition Gateway 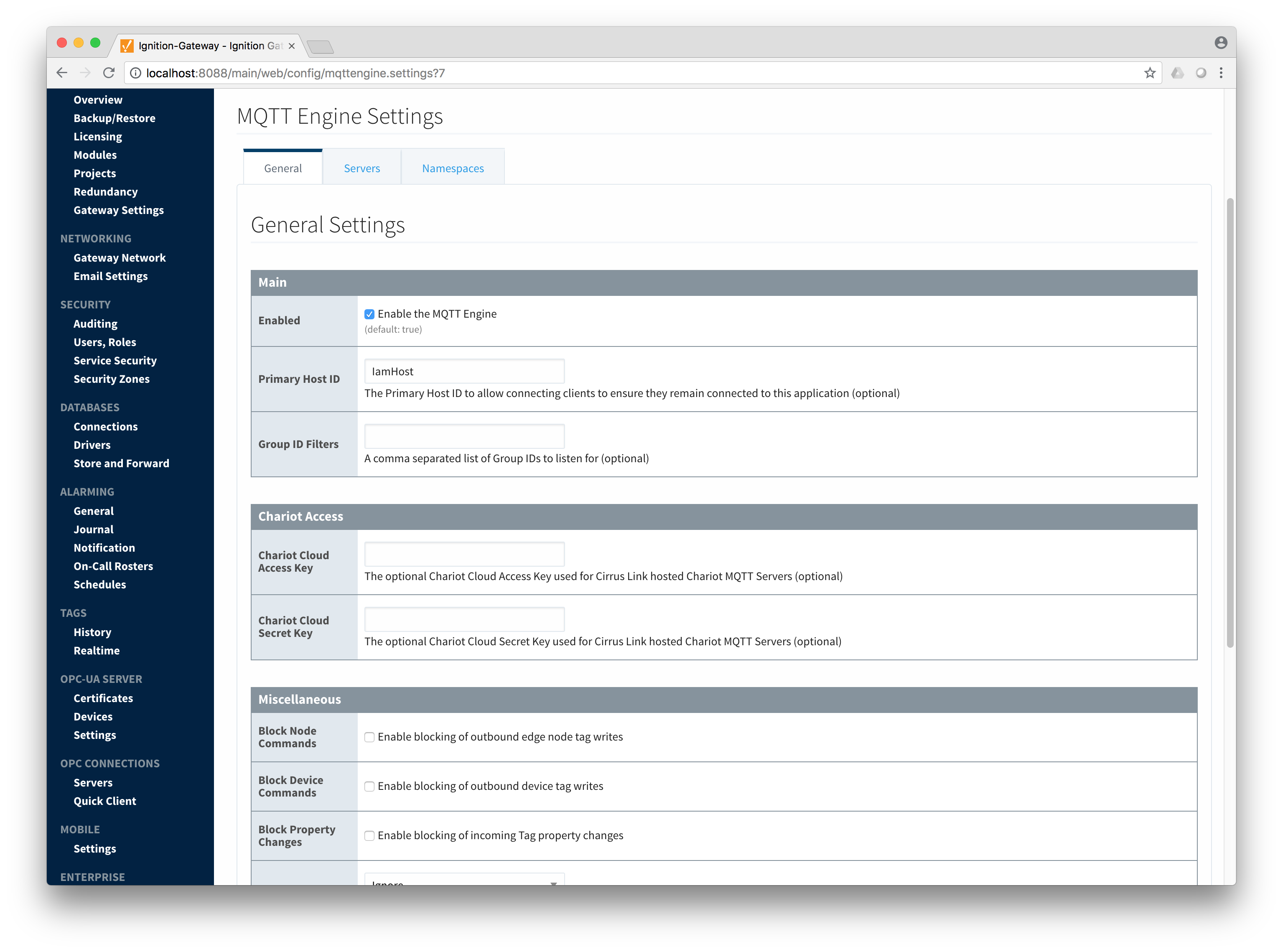 MQTT Transmission needs to be modified to point to the MQTT Server (MQTT Distributor) in order to get data into MQTT Engine.  To do so, browse to Ignition Edge MQTT with a web browser.  Then click 'Configure' at the top, log in, and select MQTT Transmission 'Settings' on the left panel near the bottom.  Then select the 'Servers' tab.  Finally, click the 'edit' button to the right of the 'Chariot SCADA' definition as shown below. 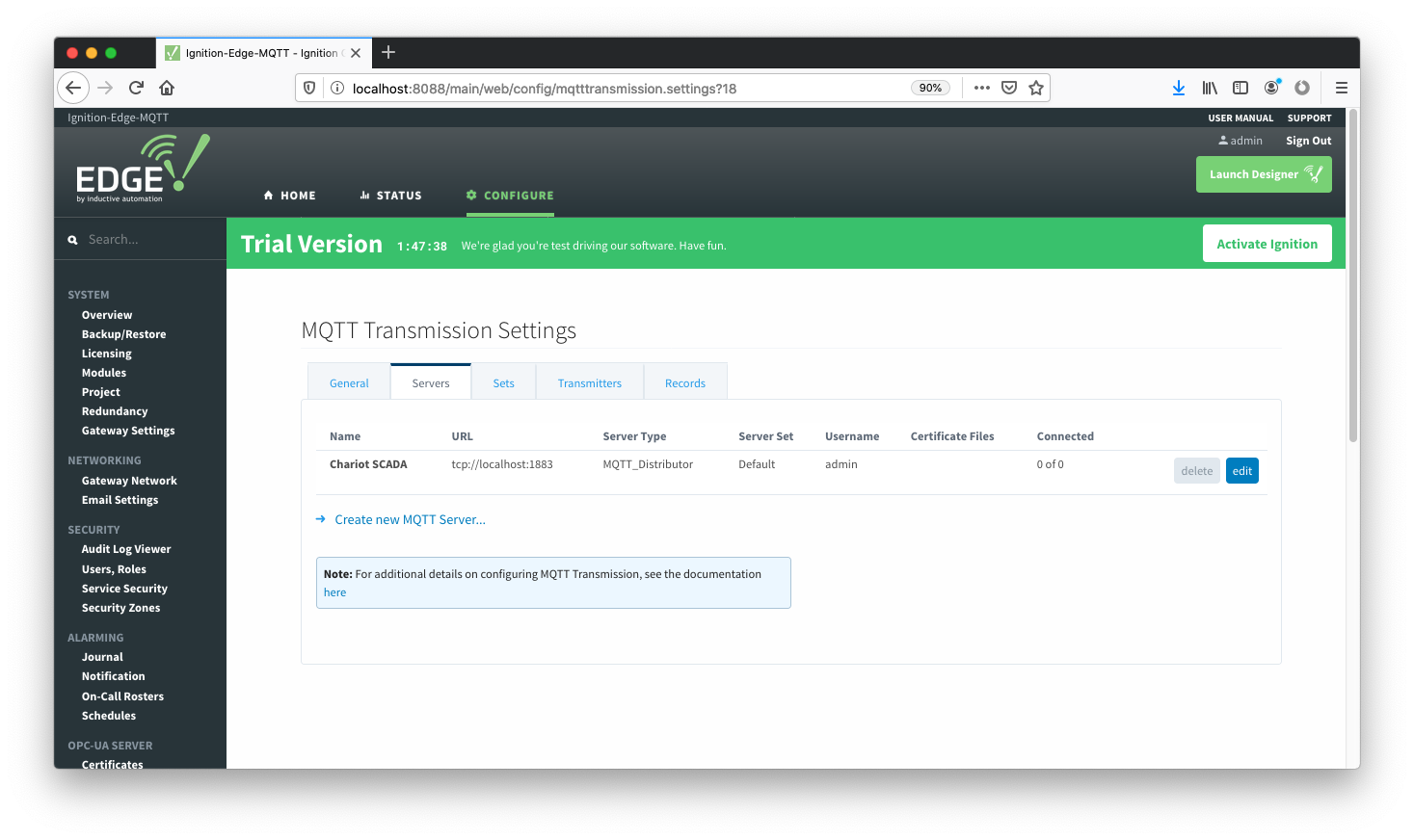 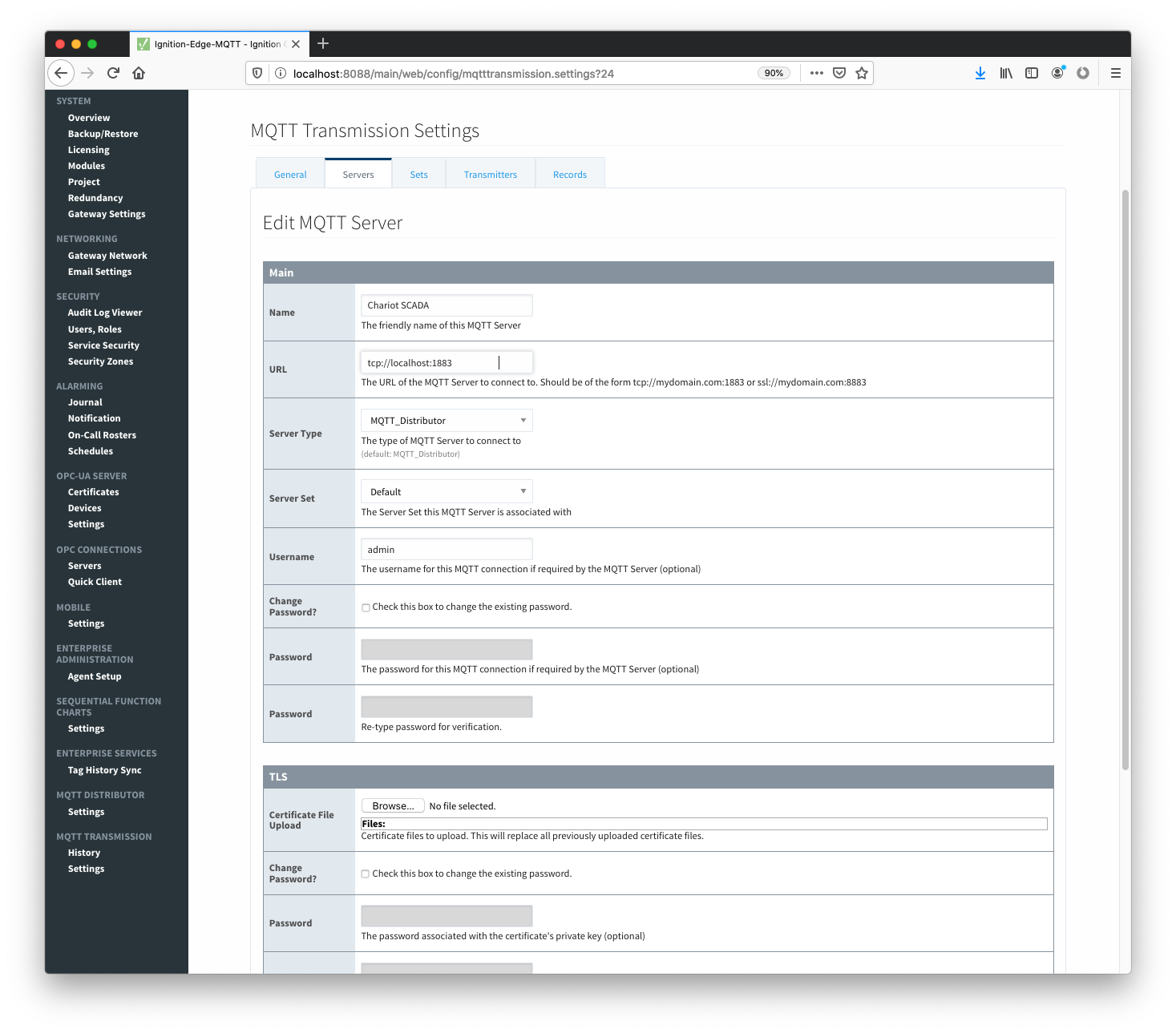 Now select 'Sets' at the top and click the 'edit' button next to the 'Default' Server Set as shown below. 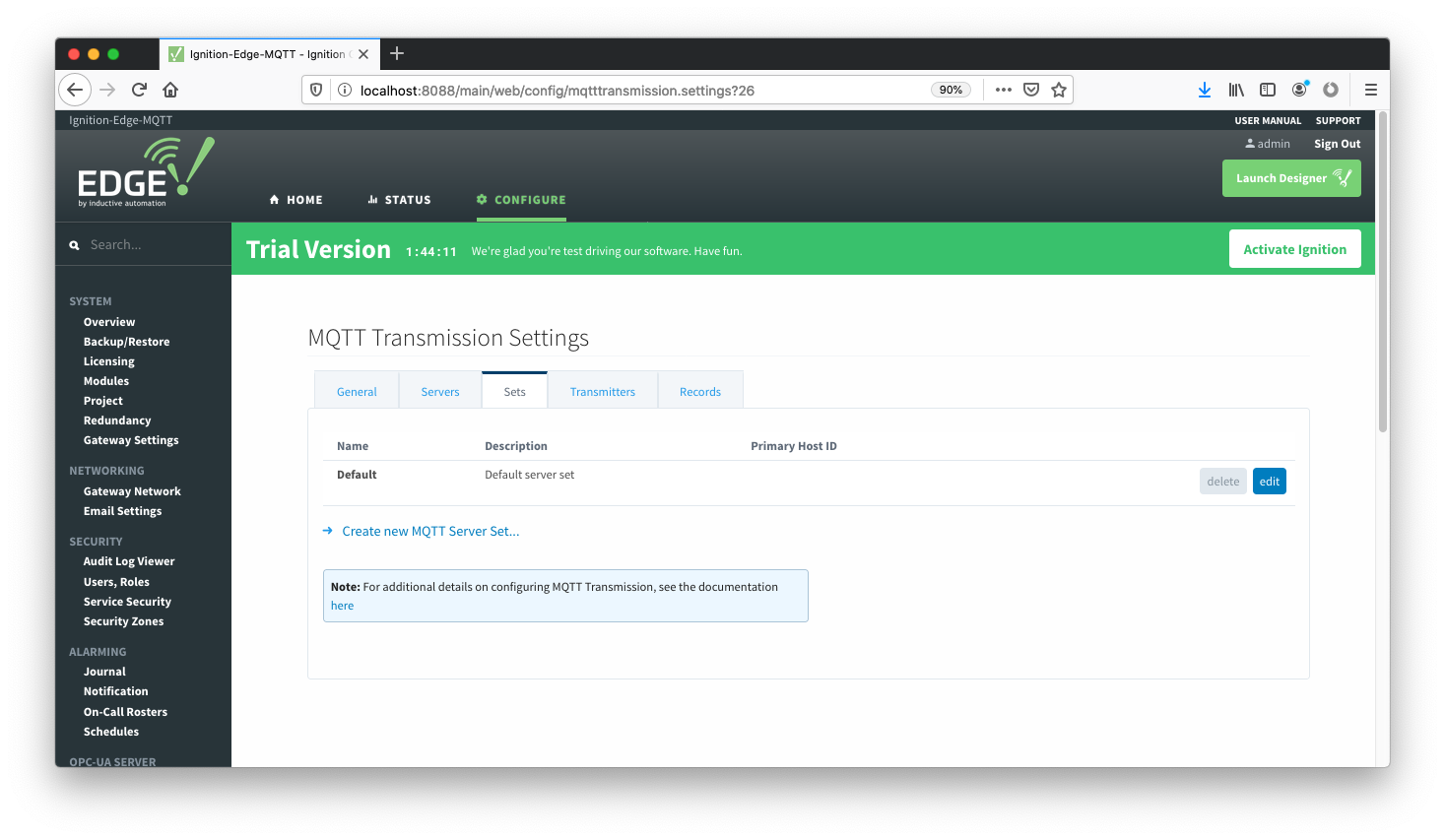 Now set the 'Primary Host ID' to the same ASCII string that was set in MQTT Engine previously as shown below and save the changes. 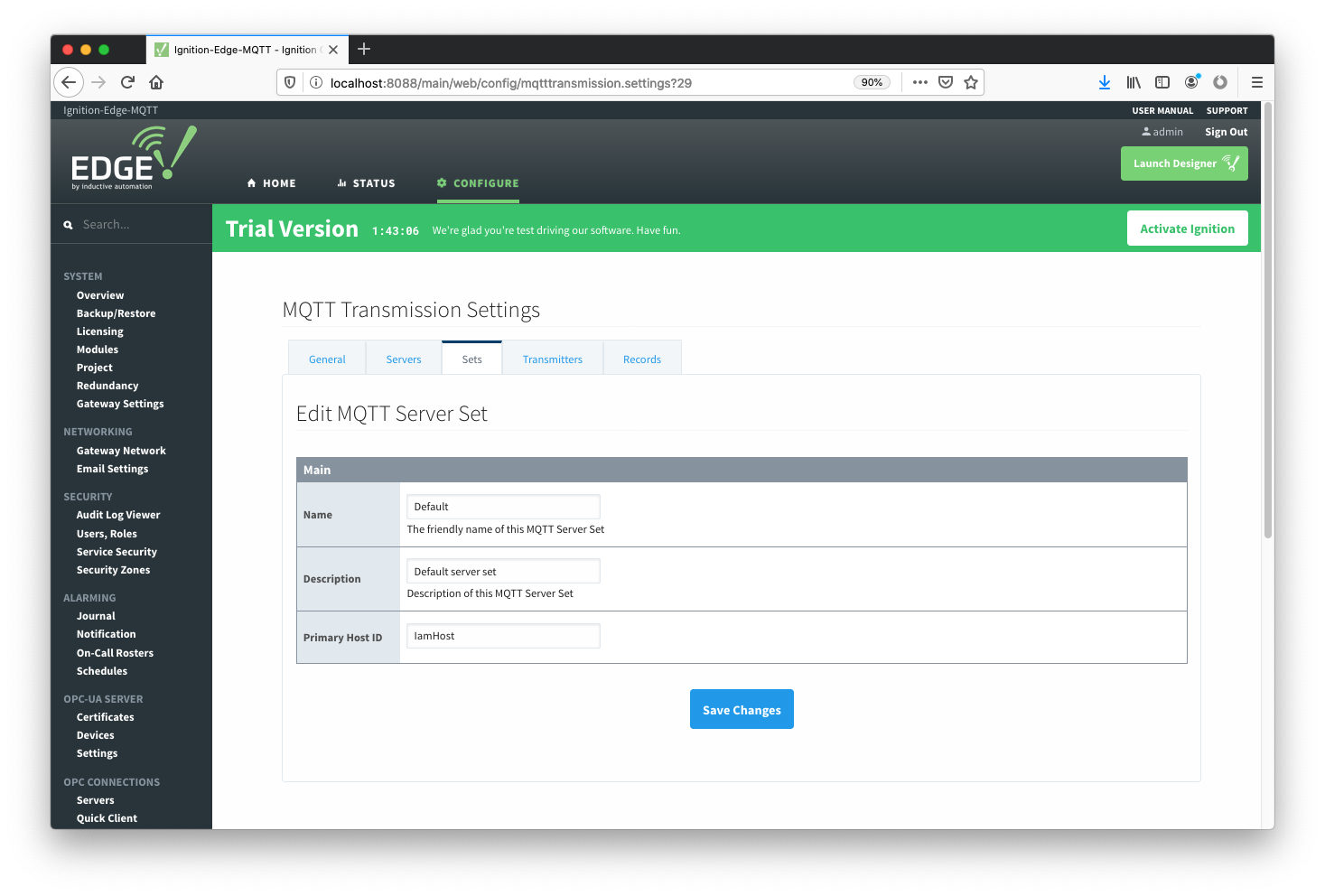 At this point we must launch Ignition Designer to create some tags to send to MQTT Engine using the MQTT protocol.  Launch Designer from Ignition Edge MQTT as shown below. 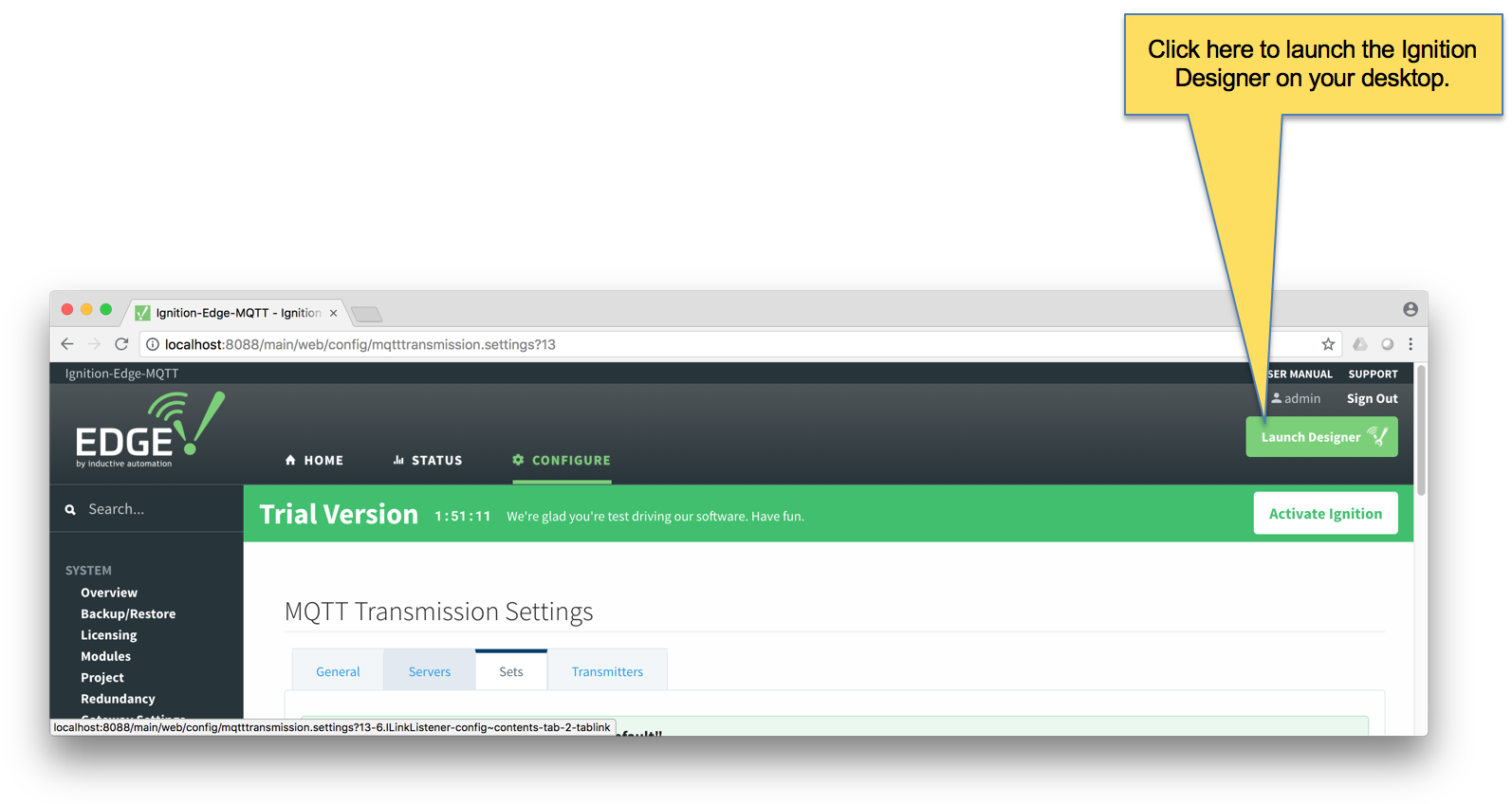 Below shows the Ignition Designer.  Expand the 'Tag Browser' pane to get a better look.  Note the 'All Providers/edge/Edge Nodes' folder.  This is where we will add some specific folders and tags to work with the 'Default Transmitter' of MQTT Transmission. 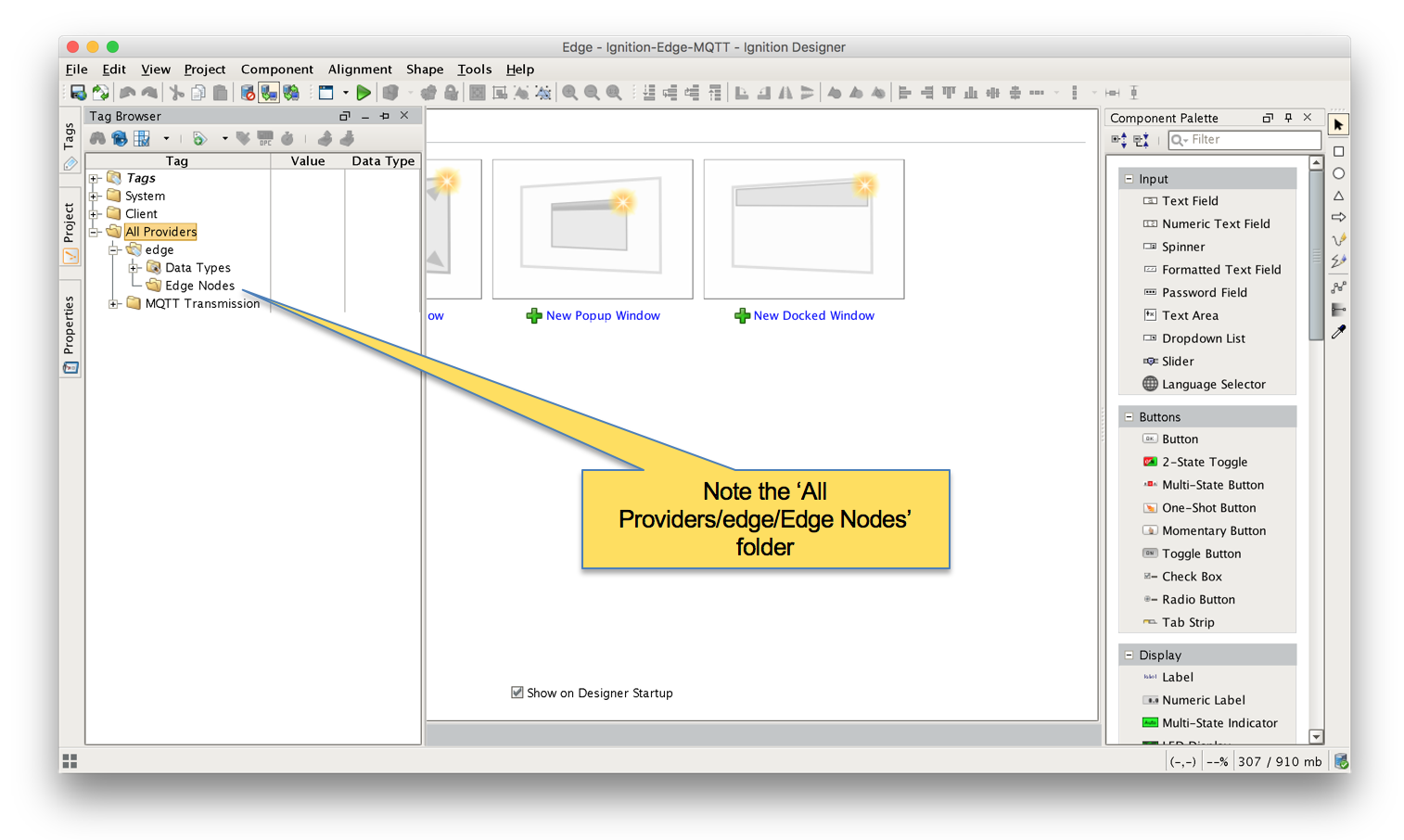 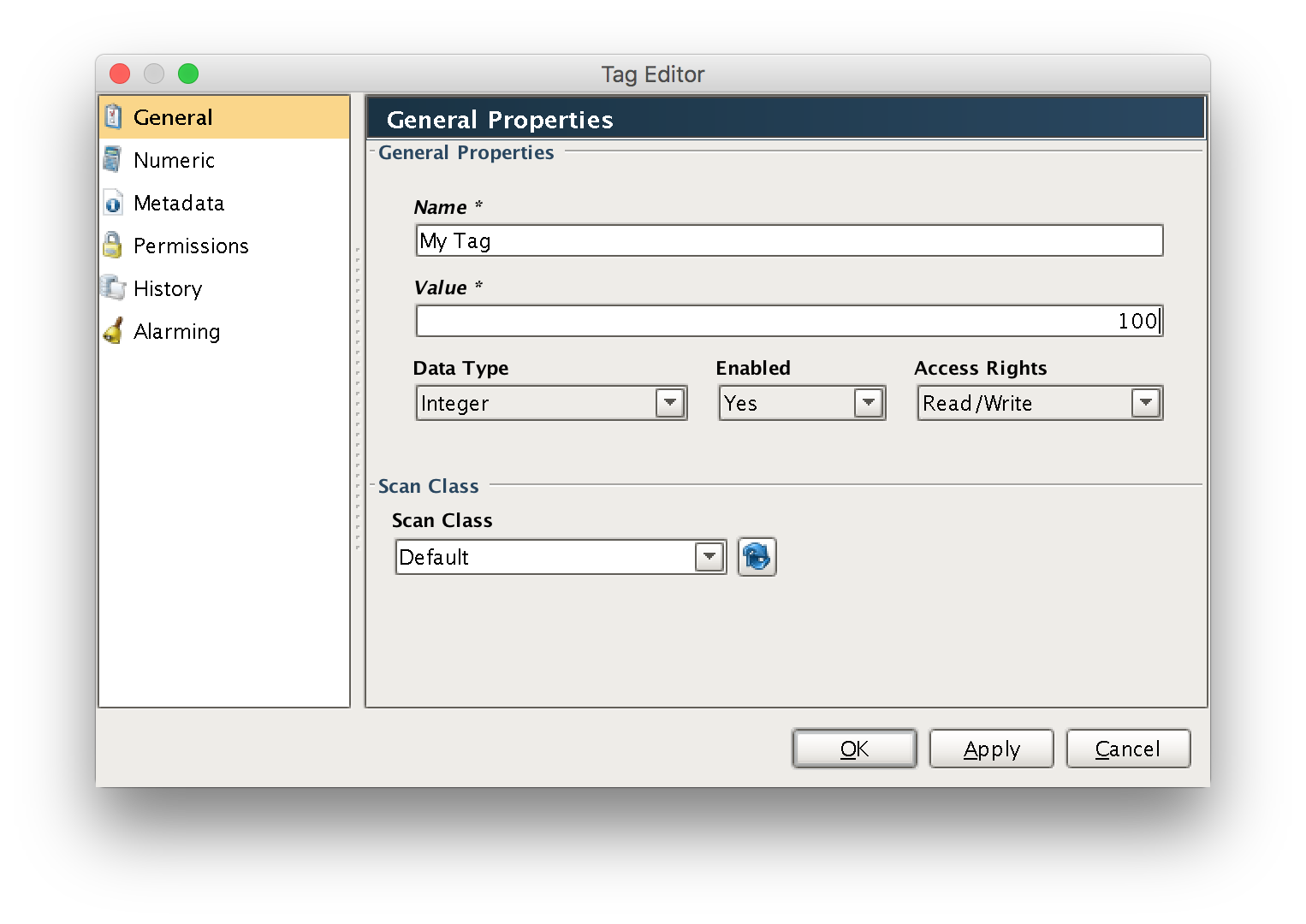 When done with the steps above, you should have a folder/tag structure as shown below. 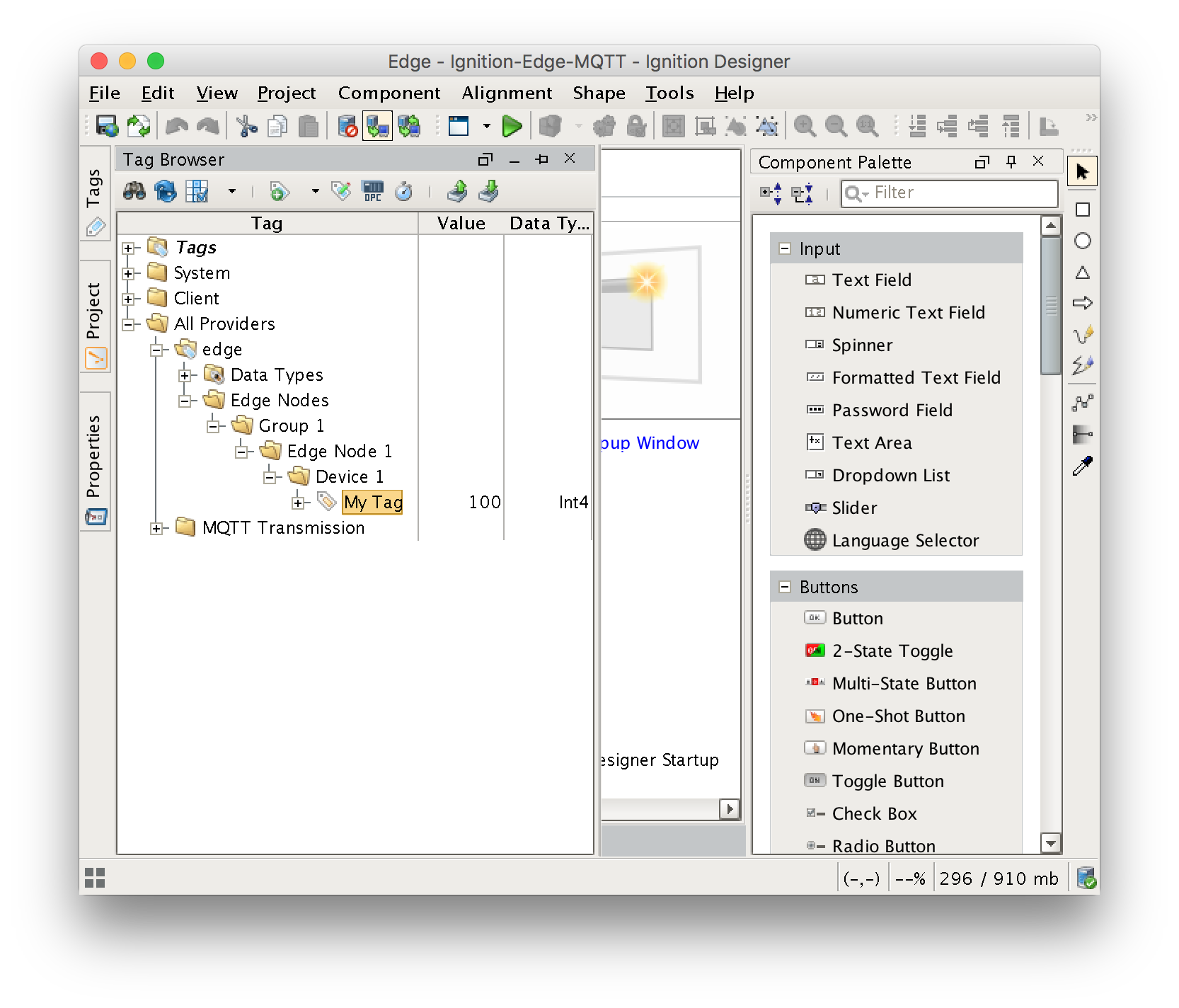 Note additional tags could be added to the 'Device 1' folder as well.  These could be OPC tags, UDTs, or other types of tags.  Also, additional folders could be added below this level as well.  The structure of the 'default transmitter' requires that the first three folder levels represent the Sparkplug Group ID, Edge Node ID, and Device ID respectively.

At this point, we can start the Transmitter by writing to the 'Transmission Control/Refresh' boolean tag.  Writing to this tag tells MQTT Transmission to rescan the entire tag tree, detect the folders and tags present, and then begin publishing Sparkplug messages to the MQTT Server.  The location of the tag to write to is shown below. 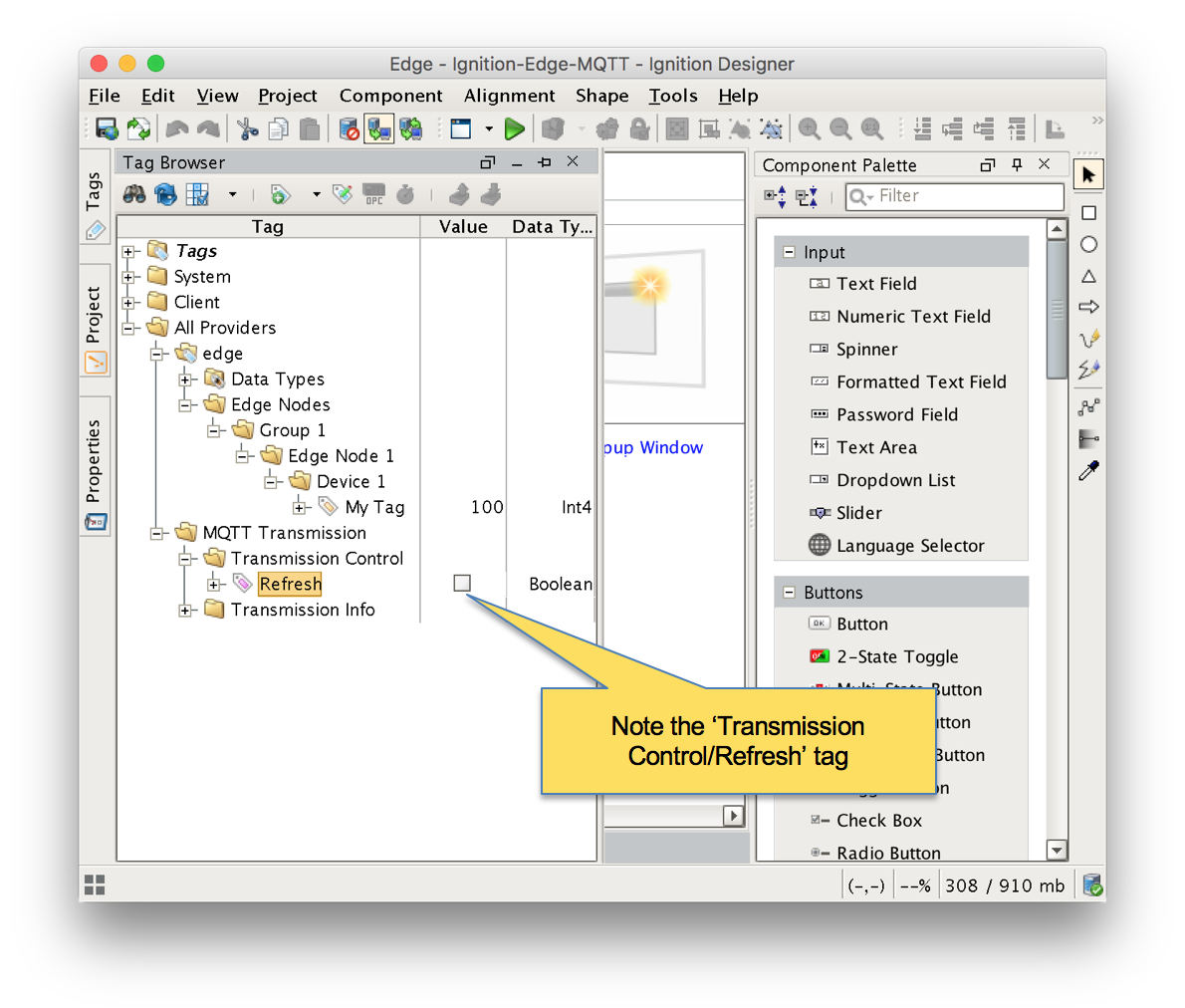 Open the Ignition Edge MQTT Web UI and browse to 'Configure → MQTT Transmission → Settings → Servers' and verify the connected status shows '1 of 1'.  If it does not, double check the firewall and antivirus settings on the Central Ignition Gateway and ensure port 1883 is open. 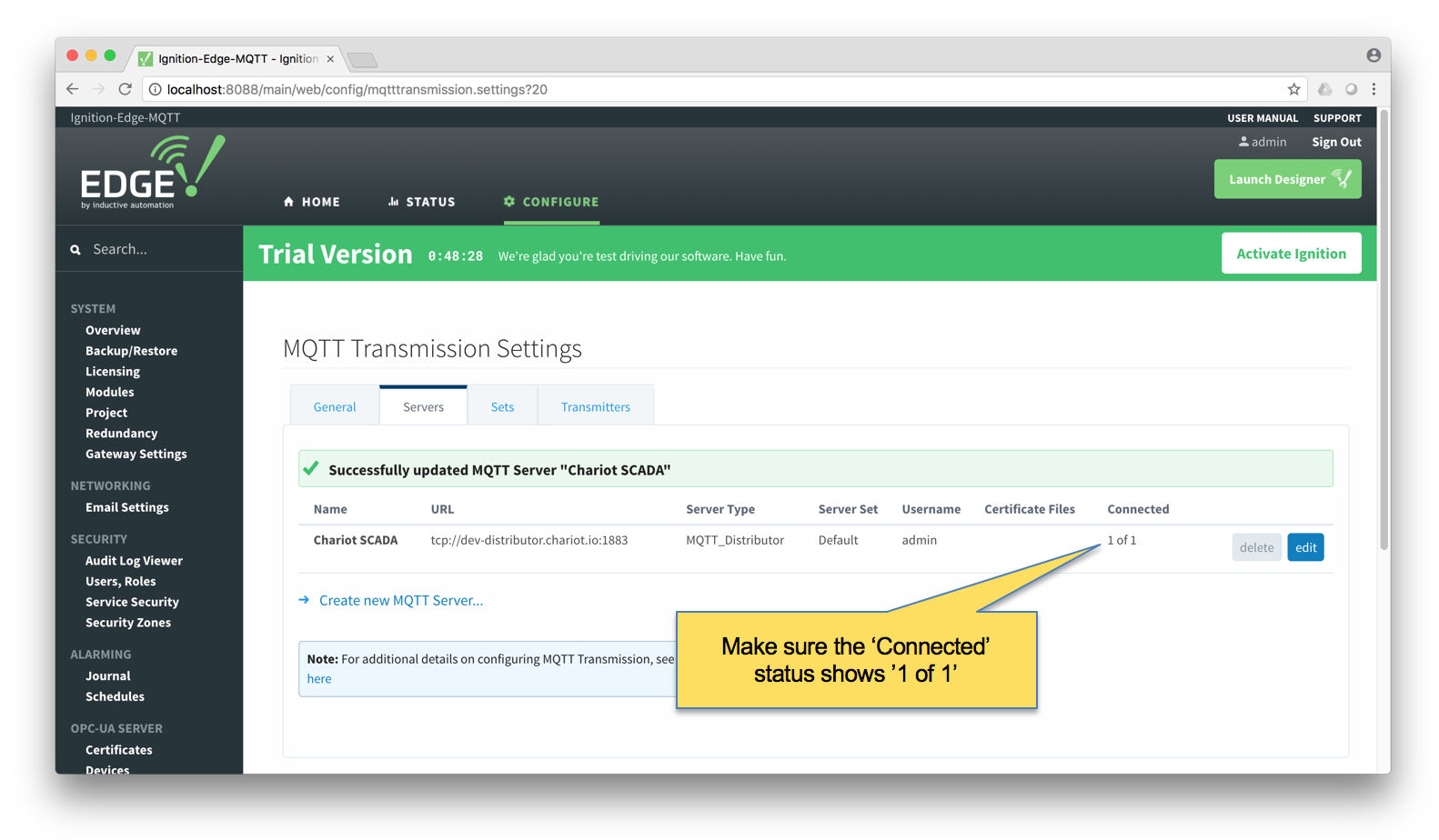 With MQTT Transmission now connected, open Ignition Designer on the Central Ignition Gateway.  Expand the Tag Browser and look expand the folder tree as shown below.  You should see the 'My Tag' tag published from the Ignition Edge MQTT Edge Node. 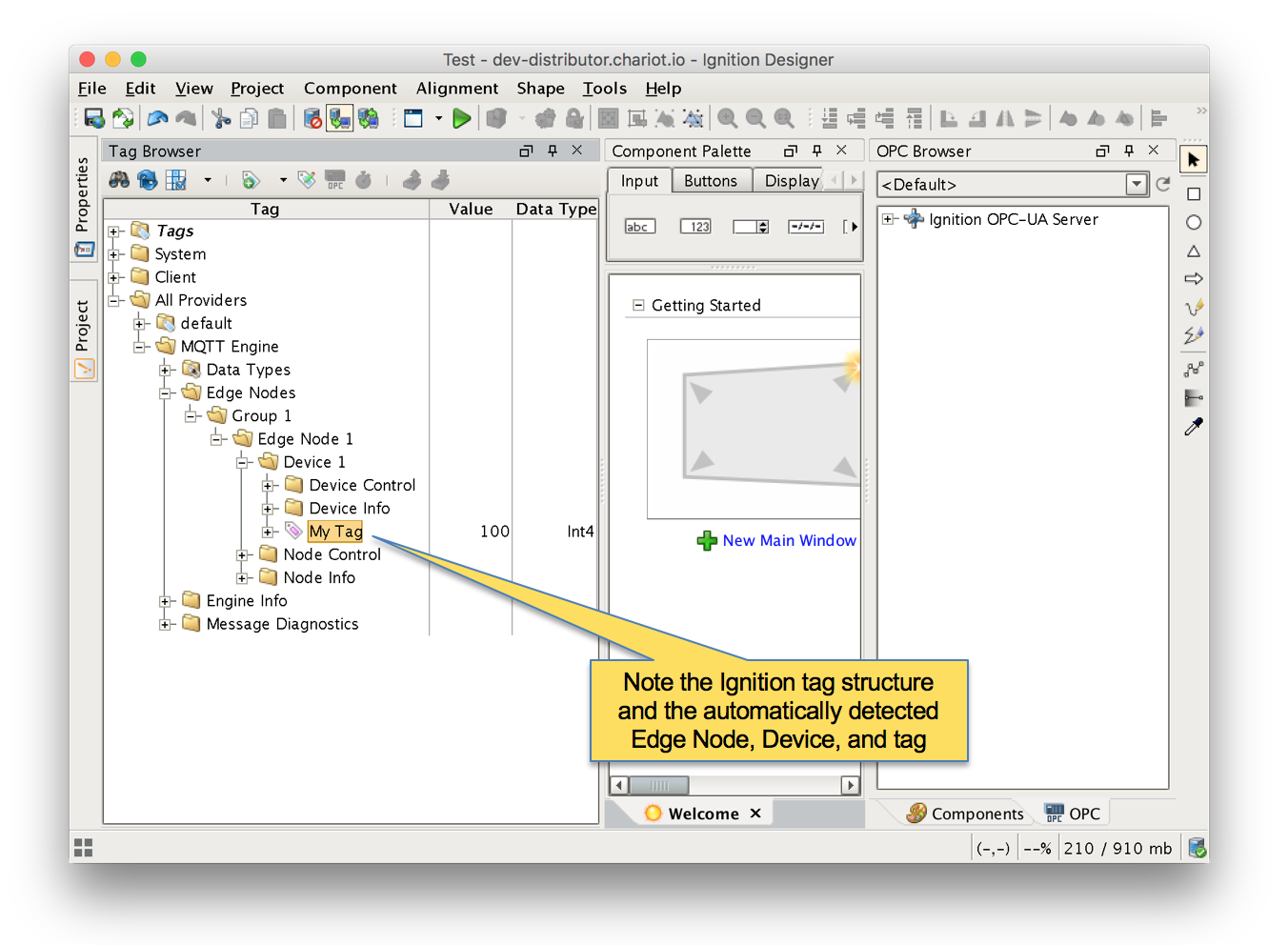 At this point you have a fully functional system that can be expanded or modified as required.  Below are some additional activities you may want to try on your own.